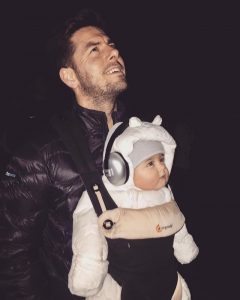 If you’re anything like me, you may not have even considered earmuffs for babies and children, let alone thought of eleven reasons your child needs Banz earmuffs  (if you have already considered earmuffs I really do applaud you). The Banz crew have generously let me share their blog. I encourage you to read on, because it’s really informative!

Have you thought about hearing damage?

Our modern world is noisier than ever before – and babies and children go to events with the family that could place their delicate hearing at risk. Did you know? Damage to hearing accumulates and can’t be reversed – unlike a cut on the finger, damage to your child’s hearing won’t heal.

This damage is known as noise-induced hearing loss (NIHL). Even a single noise event can cause hearing loss if it’s too loud, such as a loud concert or fireworks. The National Foundation for the Deaf in New Zealand says: “No matter how old or young you are, too much exposure to loud noise can permanently damage your hearing and cause NIHL… if you think it’s too loud, it probably is!”

Children have much more sensitive hearing than adults, as the bones of their skull are much thinner, and their hearing is ‘new’ and undamaged. What’s loud to you is super-loud – and often painful – to them.

The best way to prevent hearing loss in babies and children is to use high-quality earmuffs.

What’s so great about Banz earmuffs?

Banz earmuffs have a Noise Reduction Rate of a grunty 31 decibels, giving them a Class 4 rating – only one grade less than industrial-strength earmuffs – AND they meet all relevant international standards.

Fun fact: Wearing Banz earmuffs won’t deafen a child. They are noise-reducing earmuffs, not a cone of silence! This means they’re still able to hear what you say to them (good to know if they often chose to ignore you).

A note on using ear plugs for children: ear plugs are often too big for a child’s small ear canal. If they’re cut down, they still may not fit the canal properly and allow noise through. Also, those pretty-coloured ear plugs are a real choking hazard!

So, lets cut to the chase….

When should babies and kids be wearing hearing protection?

1. Flying: The noise of take-off may upset some young children, so hearing protection is recommended.

Also, an airplane cabin is a confined, noisy place! Other people, other children and in-flight announcements can be incredibly disturbing for little ones in this unfamiliar and strange situation. Wearing Banz earmuffs allows them to retreat into a quieter world – often babies will simply fall asleep. 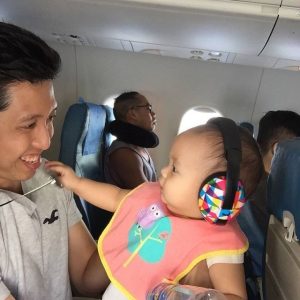 Come fly with me! Happy on the plane in Banz earmuffs

2. Fireworks: Backyard fireworks at Guy Fawkes are a Kiwi tradition. But is it worth risking your children’s hearing for a few pretty sparkles?

Although crackers and sky rockets have been banned for several years, the explosive sounds of fireworks have become louder in recent years – and it only takes one noise event to cause damage! Organised displays are even louder – although the fireworks generally detonated further away from the ground – there’s more BANG for your buck! Earmuffs are a necessity.

4. Working with tools/ home renos: If you have the builders in – or are doing the job yourself – then you’ll be surrounded by noise while the job’s underway. The professionals wear hearing protection and everyone around them should too – especially kids!

This includes the times when they’re helping Mum or Dad in the workshop. 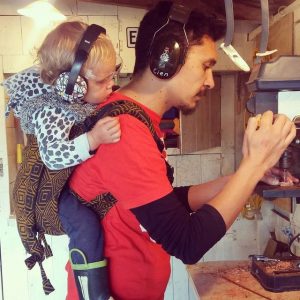 Great to see sight and sound protection in use

5. Loud events: Such as festivals, children’s concerts, airshows – if we take our kids where we can’t control sound levels, and we know the entertainment’s likely to be loud, it’s better to be safe and take hearing protection.

At seated concerts you can’t move away from the source of loud noise – and even The Wiggles and Paw Patrol may be too loud, especially if the setting is a large arena. Add in the roar of an excited crowd of children and the decibels soar. Parents have shared stories online of upset children with hands clamped over their ears, due to excess sound levels.

6. Movies: We love to take the kids to the movies, but the soundtrack may be set at ear-damaging levels.

Moviegoers have measured sounds during films at volumes reaching 98 decibels. That’s almost as loud as a train passing or an airplane taking off. According to a cinema owner, 85 decibels is about the average volume of dialogue in movies. As New York’s Children’s Hearing Institute recommends children not be exposed to noises over 80 decibels (the level of city street traffic), that’s a problem.

A sound level of 85 decibels “is where you want to stay below,” says Kit Frank, a U.S audiologist. Beyond that, “you start to hit into the range where you could potentially cause damage” to adult hearing – let alone children.

But surely, movies aimed at kids are quieter? Not necessarily. Storks, an 2016 animated feature for kids, hit a peak of 99.3 decibels. Another occasion for Banz earmuffs!

7. Childcare centres: Preschools can be very noisy places. So much so that, in New Zealand, the National Foundation for the Deaf has developed the Safe Sound Indicator – a traffic-light system – especially to raise awareness of the noise in preschools. The fix? Use Banz earmuffs to ‘turn down the volume’ for little ones upset by noise overwhelm.

The obvious area at a pre-school where earmuffs should be worn is at the carpentry table – this is good modelling of a safety practice. We have already supplied many pre-schools with Banz earmuffs – why not suggest it to the management at your centre? 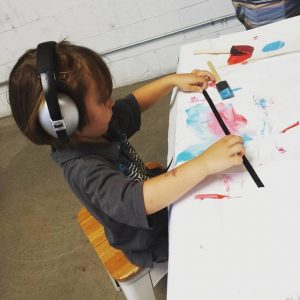 No chance of ‘noise overwhelm’ at this preschool!

8. On the farm: Loud machinery is the enemy of hearing. Adults undertaking farm duties generally know to wear hearing protection – but if their kids are around the chainsaws, tractors, trucks, weed-eaters and the like, farmers need to protect their hearing as well. Some animals are really, really loud – did you know a pig squealing can be as loud as a snowmobile’s engine? Banz earmuffs are very popular in New Zealand’s rural communities!

9. Noise-sensitive children: Some children are more sensitive to loud noise and overstimulation than others. Wearing Banz earmuffs in triggering situations allows a child the chance to regroup by dulling down the external stimulation – many customers have described their child’s Banz earmuffs as “a life saver”. Children with autism and sensory processing disorder find Banz earmuffs particularly useful.

10. At home: It’s possible your child may find noises around the home, such as vacuum cleaners and blenders, too loud. Slip on a set of Banz earmuffs and they’re happy! Parents who practice their drumming – or any instrument – at home can now protect their child’s ears from harm and not just from bum notes!

11. Sports: And… the crowd goes wild! We all want to support the team, but the sheer volume of the roar of the crowd at a game can be overwhelming for little ones, scary and harmful to their hearing. Sound levels at major games have been measured at the same level as a jet engine taking off… over and over and over… Play safe and invest in Banz earmuffs for your kids. 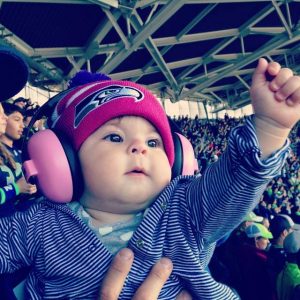 Yes! My ears are comfy and my team’s winning!

So, where will your children wear their Banz earmuffs? Comment and tell us! And if you’re reading this before midnight on Thursday 29th March 2018, you still have a chance to win a pair! Enter HERE.

Thanks to Andrea Little for the use of this blog – Andrea’s the owner of Banz Carewear New Zealand!  You can check out her story HERE. And check out Banz NZ website where you’ll find children’s sunglasses, ear protection and more: www.babybanz.nz